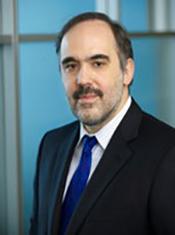 Constantin Aliferis received an MD degree from Athens University in Greece in 1990, and an MS in 1994 and PhD in 1998 in Intelligent Systems from the University of Pittsburgh. After completing his PhD, Aliferis returned to Greece to complete two years of mandatory military service. At the same time he served as a research associate in epidemiology at Athens University. In 2000, Randy Miller and William Stead recruited Aliferis to Vanderbilt University to serve as an assistant professor of biomedical informatics and founding director of Vanderbilt University’s MS/PhD Program in Biomedical Informatics. While at Vanderbilt, Aliferis was founding director of the Discovery Systems Laboratory (2001-2008), faculty member at the Vanderbilt-Ingram Cancer Center (2000-2008), assistant professor of cancer biology (2005-2008), assistant professor of computer science (2007-2008), and assistant professor of biostatistics (2007-2008). In October 2008, Aliferis was recruited to New York University to serve as founding director of NYU’s Center for Health Informatics and Bioinformatics, Director of the Biomedical Informatics Core of NYU’s Clinical and Translational Science Institute, and associate professor of pathology (with tenure); positions he held until left NYU in June 2015. While at NYU, Aliferis also held the following positions: associate professor, computational biology program, Sackler Institute of Graduate Biomedical Studies (2009-2015); scientific director, Best Practices Integrative Informatics Consulting Core (2009-2015); scientific director, High Performance Computing Facility (2009-2015); founding director, NYU PhD Program in Biomedical Informatics (2011-2015); director, Biomedical Informatics Shared Resource of the Cancer Institute (2012-2015); and faculty, NYU Center for Data Science (2013-2015). In June 2015, Aliferis was recruited to the University of Minnesota. At the University of Minnesota, he holds the positions of professor and director of the Institute for Health Informatics, and the first University of Minnesota chief research informatics officer, heading the Clinical and Translational Institute Biomedical Informatics program. Aliferis will also build and lead a Big Data Analytics Unit for MHealth (collectively the Academic Health Center, Fairview Health Systems, and University of Minnesota Physicians) and carry the title of chief analytics officer. Dr. Aliferis’ research is focused on high dimensional modeling and analysis designed to transform biomedical data into novel actionable scientific knowledge. His three key areas of broad interest are (a) use of advanced informatics and analytics to accelerate and enhance the sophistication, volume, quality, and reproducibility of scientific research; (b) quality and cost improvements of healthcare using Big Data approaches; and (c) precision medicine. Dr. Aliferis was elected as a fellow of the American College of Medical Informatics in 2007.

Constantin Aliferis begins by discussing his educational background, including his early interest in biomedical and health informatics. He describes the main focus of his research since graduate school, which has included machine learning and the analysis of complex and high-dimensional data sets; scientometrics and informatics retrieval; and model building, analysis, and knowledge discovery across a variety of disease domains. Aliferis goes on to briefly discuss his tenure at Vanderbilt University, followed by a more detailed discussion of his tenure at New York University. Next, Aliferis offers his definition of precision medicine. The remainder of the interview focuses on health informatics at the University of Minnesota. Aliferis describes his vision for the Institute for Health Informatics, reflects on the strong backing provided by the leadership of the University to support this vision, and offers his perspective on the future of the field of biomedical and health informatics.

Transcript Link
Link to the transscript